Tour to the Dream 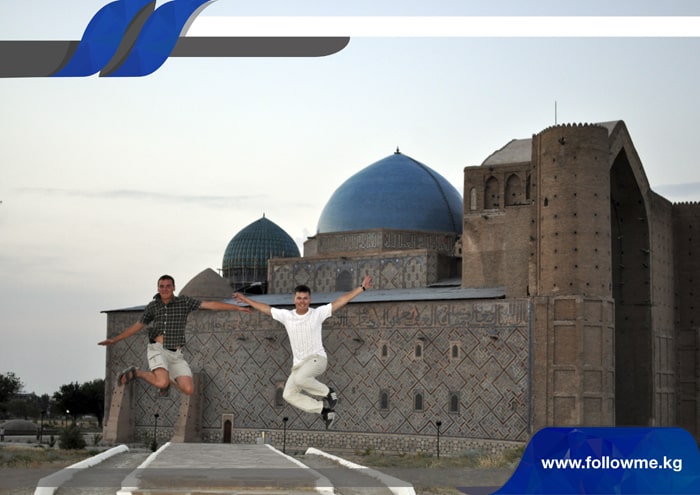 Day 1: Almaty - Shymkent
Guide will meet and accompany you to Shymkent for sightseeing. The location of the city is at the crossroads of the Great Silk Road, with the oldest cities of the middle ages such as Otar, Turkestan, Syganak, Sauran and others. As in the past, this city is a historical and cultural center in the south of Kazakhstan, the presence of industrial infrastructure and an attractive territory for the tourism business. You city tour includes visiting major sites of the city: Memory Alley in Park named after Sh. Kaldayakov, Monument “Jer An”, Ordabasy Square Park “20th Anniversary of Independence of the Republic of Kazakhstan”, Museum of political repression victims, Obelisk of Glory, Walk of Fame, Eternal Fire to the fallen in the Second World War, Arboretum. Visit to the regional historical museum of local lore. Night is in the hotel. 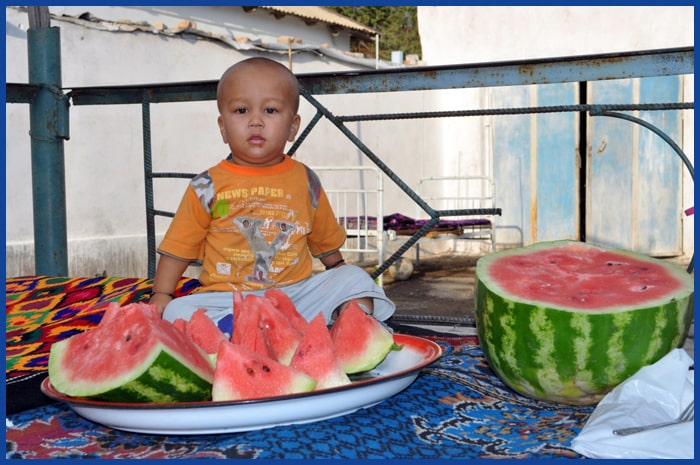 Day 2: Shymkent – Turkestan – Shymkent
You will have a day trip to Turkestan.  It was established around 500 AD and situated at the crossroads of caravan routes from Samarkand, Bukhara and Khiva to northern Kazakhstan. in the XVI-XVIII centuries this city was the capital of the Kazakh Khanate as well as spiritual and political center of the Turkic-speaking population. Due to the famous Sufi sheikh and philosopher Khoja Ahmed Yasawi this city gained a lot of reputation in international stage. Khoja Ahmed Yasawi was buried here in 1166, but it was built after 233 years after his death by the order of an outstanding military leader Emir Tamerlane. Because of this now we can enjoy the masterwork of medieval architecture and one of the main places of worship for Muslims. A lot of legends say that practically all effort to build it failed. One of them says that a saint, appeared in Tamerlane’s dream, said that at first he need to build a mausoleum over the grave of Arystan Bab (teacher and spiritual mentor of Khoja Ahmed Yasawi), and only then the tomb of Khoja Ahmed Yasawi, what Tamerlane did. Due to it pilgrims visit the mausoleum of Arystan Bab, and then Mausoleum of Khoja Ahmed Yasawi. Pilgrims say that three trips to Turkestan equal small Hajj to Mecca. In addition you will visit historical and architectural complex- "Azret-Sultan" Mausoleum of Khoja Ahmed Yasawi, Turkestan ancient settlement, Necropolis, a fragment of the fortress wall, Citadel with gates, Hammam, Hilvet underground mosque. Overnight is in the hotel 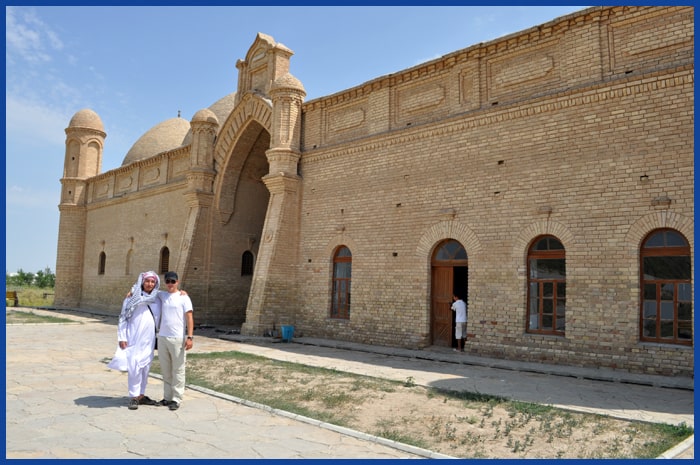 Day 3: Shymkent – Almaty
Your destination today is Almaty, where you will see the history and development of the Southern capital of Kazakhstan as well as its main attractions.  Due to it, the first site to visit will be Green Bazaar. Here you can enjoy haggling, dive into atmosphere of the real eastern market, its colors, smells and crowds as well as obtaining famous oriental sweets.  After it you will visit Panfilov Park, one of the oldest parks in Almaty. Here you can find one of the most prominent wooden buildings in the world- Zenkov Cathedral. Next site is the Memorial of Glory and Eternal Flame, devoted to the memory of the fighters who died for freedom and independence of the country. After exploring all the part of this city you will be transferred to Kok-Tobe hill. This place is famous due to the tallest TV tower in the world, to reach this place you need to drive through amazing winding mountain road. In Kok-Tobe Park you can jaunt along the winding paths of the park, enjoying the sumptuous panorama of the city from the observation deck and visit the shop of national souvenirs. For returning to the city you need to have a short ride from the top of the hill to the center of the city by the famous Almaty cableway. Night is in the hotel. 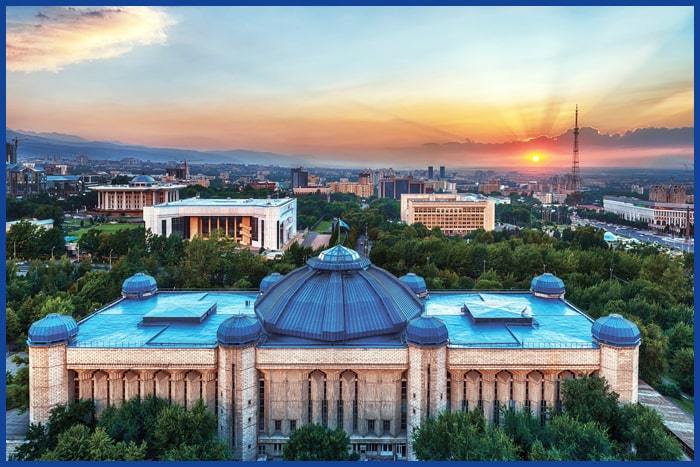 Day 4: Almaty – Issyk Lake – Almaty
You way to Issyk Gorge lays through Kuldja tract of Trans-Ili Alatau. Here at the past trade caravans travelled. During the drive you will find out more about nature and history of this region and see the burial mounds of Sakas period, where the famous "Golden Man" was found. This sight started to be the state token of the Republic of Kazakhstan.  In addition you will have a chance to visit the State Historical and Cultural Museum-Reserve “ISSYK”, where you will see the exhibition devoted to the history and culture of the Sakas period, including a copy of Golden Man and golden items, ancient ceramics, weapon, elements of horse equipment, as well as the example of Sakas burial mound. Then you will continue driving to the lake of 1 756 meters high – Issyk Lake, situated in the valley with the same name. Because of the gargantuan slide this lake appeared and made a natural dam of 300 meters in height. On the lake you will be delighted by the majestic view of the surface of the lake and the Issyk Gorge, as well as listen to the details of the natural disaster of 1963. Having picnic and free time to explore this area. Night is in the hotel. 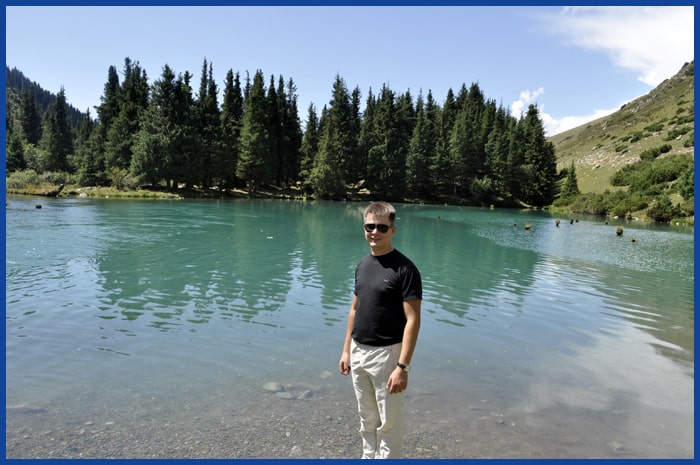 Day 5: Flight
Transfer to the airport

Shymkent is the third largest city in Kazakhstan, industrial center of the country.
Otrar is one of the flourishing cities in the Great Silk Road.
Turkestan is ancient city famous for mausoleum of Khoja Ahmed Yasawi.
Arystan Bab mausoleum of the 14th century is dedicated to a mystic preacher.
Almaty is a city located at the foothill of Zailiy Ala Tau that gives a splendid view to it.
Green Bazaar has abundance and variety of goods starting from fruits and ending with meat.
Park of 28 Panfilov Guardsmen is one of the popular places in a city that has a few sites inside.
Zenkov Cathedral is one of the world’s top highest buildings made of wood.
Kok Tobe hill allows observing a great city panorama and offers lots of entertainments.
Issyk Lake is small lake with dramatic history of avalanches.