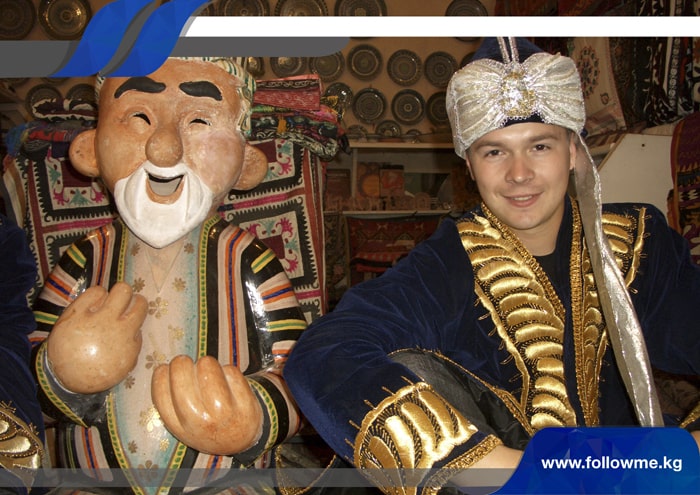 Day 1: Tashkent – Urgench – Khiva (Morning flight)
Upon arrival to Tashkent you will be met by driver with signboard at meeting area and transfer to the hotel. After that you will transfer to hotel. Then you will have a flight to Urgench for to Khiva arrival. You will have great sightseeing tour in the oldest city of Uzbekistan which will be served inside of Ichan-Qala. It is the inner city in Khiva surrounded by huge walls. On the way you will see examples of old sound buildings, palaces, mosques, Madrasahs, Mausoleums, Minarets, Caravan-Sarais and Bathhouses malformed Ichan-Qala into ancient city-monument. Ichan-Qala is a wonderful complex which has 400 traditional dwelling houses and 60 architectural monuments. It is important to note that in 1969 Ichan-Qala was elected a historical and architectural conservation area. Visit the Kunya-Ark fortress found in the 17th century by Muhammad Arang Khan. Talking about Kalta Minor minaret and Tash Khouvli palace, they are unique sample of Khorezm architectural mastership of 1830s. The night is in a hotel. 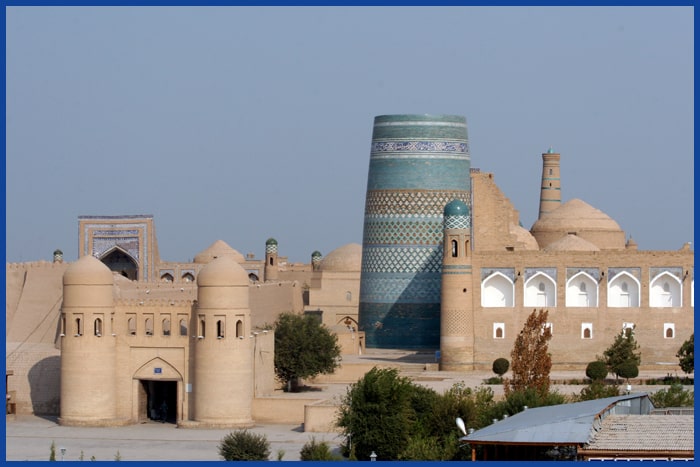 Day 2: Khiva – Bukhara (440 km, 7 hours)
Today in the morning you will travel to Bukhara city.  There are about 140 architectural monuments found in the middle Ages. You will be impressed by narrow streets, green parks and gardens, historical and architectural monuments of different epochs. You will drive from Khiva to Bukhara to the famous Kizilkum desert. On the way you will have the opportunity for photo stops and enjoy the view to Amu Darya River. It is the deepest river in Central Asia, formed by the confluence of the Panj and Vakhsh in Tajikistan and flowing into Aral See. When you arrive to Khiva, you will have a break. Overnight is in a hotel. 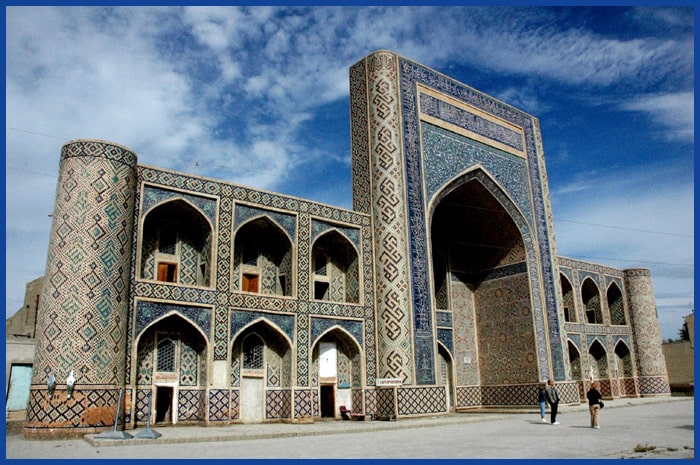 Day 3: Bukhara
We are glad to impress you by wonderful city tour in Bukhara town. Don’t miss the chance of visiting the most ancient citadel in Bukhara (4th century) – Citadel Ark. It was the main house which functioned for several dynasties of Bukhara Empire. On the way you will see Samanids mausoleum. It is a really wonderful site of 9th -10th century. The day will go on visiting Chashma Ayub which means Job's well. On the way you will have an idea of visiting Bolo-Hauz mosque. You can visit the mosque of forty columns which was built in honor of Bukhara governor Abu-Fayud Khan. Then you will have a free time where you can visit shops and buy gifts for your family and friends. Afterwards you will visit one of the most famous madrasahs of Bukhara called Nodir Divan Begi. It belongs to Lyabi House Ensemble which is famous central sightseeing of Bukhara. After that you will visit Poi Kalon complex. It is very famous in Bukhara. It has three structures which were built in the 12th – 16th centuries. They are Kalon minaret, Kalon mosque and Mir Arab Madrasah. Overnight is in a hotel. 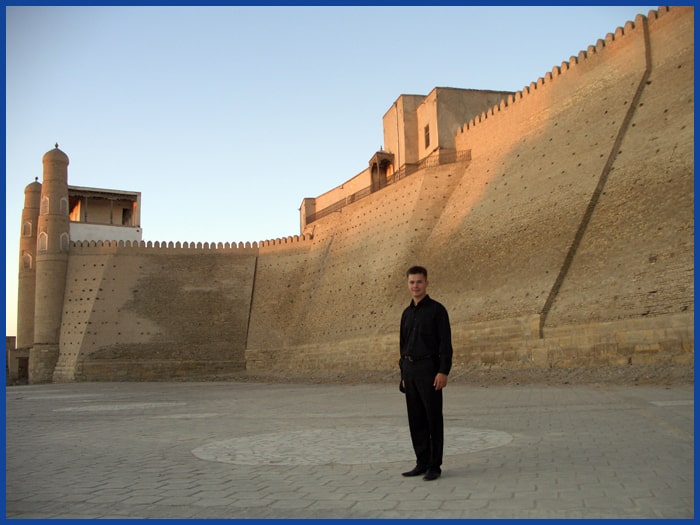 Day 4: Bukhara – Samarkand (Morning train)
Today you will transfer to Samarkand by train. The wonderful city of Samarkand situated in the valley of the river Zerafshan which is the second largest city of Uzbekistan. The tour will start by visiting Registan square, Shakhi-Zindeh, Mausoleum Guri Emir and Bibi Khanum Mosque. Registan Square is a beautiful complex which has three Madrasahs found in the 15th-17th centuries. We have no doubt you will like it. Shakhi-Zindeh is famous for a huge assembly of mausoleums found in 11th-15th centuries and also became a part of a UNESCO World Heritage Site. Bibi Khanum Mosque is an ancient complex belonging to favorite Tamerlane’s wife, after his successful trip in India. Night is in a hotel. 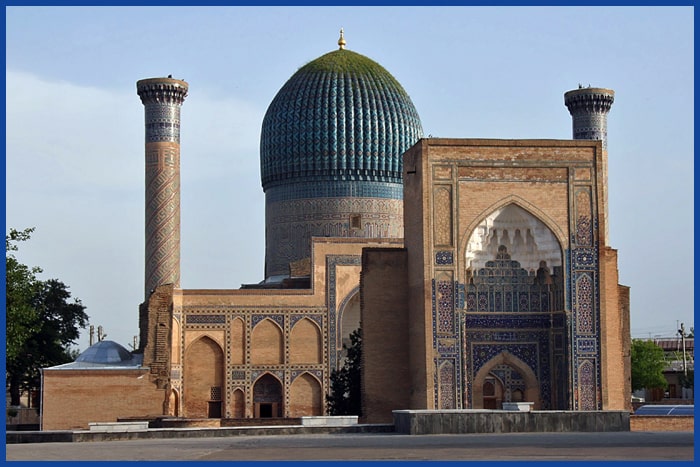 Day 5: Samarkand – Tashkent (Morning train)
In the morning you will transfer to Tashkent by train. On arrival you will have a city tour in Tashkent. Visit the Independence square which is erected as a symbol of victory over fascism in World War II. Then you will walk near the local Broadway and take inspiration of Amir Timur square. Later on you will have a chance to visit the famous Tashkent metro. This is a very popular among travelers and found in 1977. Afterwards you will visit the old part of the city as Chorsu Bazaar, Kukaldash Madrasah and Hast Imam which has different kind of madrasahs, mosques and mausoleum. It is imporant to see the Othman Quran! It is considered to be the world’s oldest Quran copy (8th century). Today you will spend night is in a hotel. 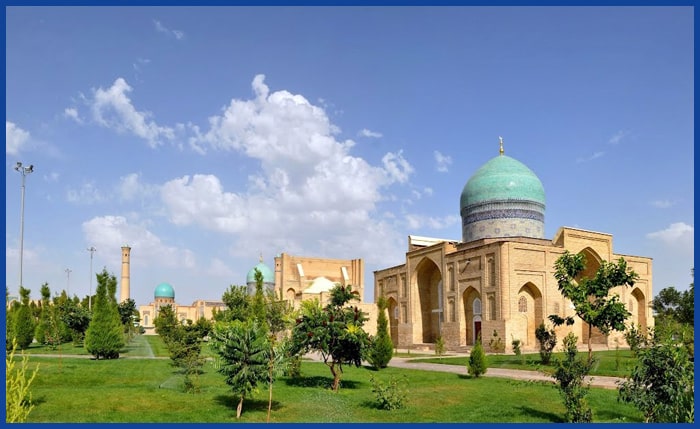 Service does not include:
- Visa
- Full board
- Travel insurance
- English speaking guide
- Entrances to all museums
- Flight tickets Tashkent – Urgench

Tashkent is the capital city of Uzbekistan located in the north-east of the country.
Khiva is a city of legends and mythical characters of ancient times.
Ichan-Qala is an ancient and stunning fortress with a rich Uzbek inheritance.
Kunya-Ark fortress is the wonderful stronghold of the eastern world and high culture.
Kalta Minor minaret is a golden symbol of turquoise color, found by Mohammed Amin Khan.
Bukhara is the city with the largest number of mosques and sacred places.
Citadel Ark is an ancient monument of Bukhara which was actually created in 4-3 centuries.
Samanids mausoleum is considered to be the site of greatest ancient history of Samanids dynasty.
Chashma Ayub is located near the ruins previously being at the territory of the Samanids.
Bolo-Hauz mosque of 18th c. has an interesting design with about 20 columns surrounding it.
Nodir Divan Begi madrasah used to be caravanserai previously, but then became madrasah.
Lyabi House Ensemble was created in the times of Sheybanids and has several madrasah around.
Poi Kalon complex is the greatest building of Bukhara and means “the foot of the minaret”.
Samarkand has experienced many declines throughout the history of the Great Silk Road.
Registan square was created by the grandson of Amir Timur and situated in Samarkand.
Shakhi-Zindeh has more than 11 mausoleums based here in 14-15th centuries.
Mausoleum Guri Emir is the place where Amir Timur, his sons and grandchildren were buried.
Bibi Khanum Mosque is said to be created in 1399, on the order of Amir Timur for his wife.
Independence Square is one of the key sightseeing during your tour to Tashkent.
Broadway is one of the best places to have a walk located in the center of Tashkent.
Amir Timur square was first created in 1870, by the architects from the Russian Empire.
Chorsu Bazaar is the center of Uzbek atmosphere where you can try various traditional food.
Kukaldash Madrasah is the educational center created for boys and girls to study religion.
Hast Imam complex is the spiritual place for the people to come and pray.